Low number of features per sample after DADA2

I have a cohort of 101 samples. for each sample, I have 2 Fastq files (forward and reverse).
I successfully imported all files using the "Fastq manifest” formats and got a demux.qza file: 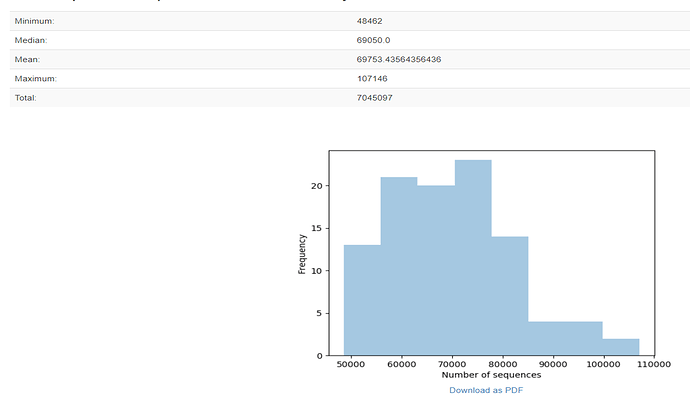 but I get a very low number of features per sample or no features at all, and I don't understand why.

I tried to change the values in the "trunc" parameters but it didn't help.

it's important to say that I have another data set that I imported in the same manner and I have the same problem with it.

hope you can help me

Hi! Maybe the reason is that you are using to strict parameters to cut your sequences and they are not overlapping. Is it V3V4?
You should consider increasing

parameters. In my case I rerun it several times with different parameters and took the best output

I tried to change the values in the “trunc” parameters but it didn’t help.

How much you changed it?

Hi @Adi!
You can use qiime metadata tabulate to visualize your DADA2 denoising stats. This is roughly what the output will look like. (There’s an example of this command in the Atacama tutorial)

Each step in DADA2’s process gets a column in this table. If you read across the rows, you can see at which step you lost most of your reads (steps from first to last are shown in order from left to right). This will help you diagnose why you lost reads, and allow you to intelligently re-set your parameters.

For example, if as @timanix suggests, you lost most of your reads between ‘denoised’ and ‘merged’, your forward and reverse reads are not long enough to join. (given the parameters you chose).

There are many forum posts here describing how to handle read-joining problems. If that’s your situation, spend some time searching

and you’ll find what you need.

All the best,
Chris