Hello, I have shotgun sequences that, prior to using in QIIME, I mapped to the UNITE database so I could eliminate extra non-fungal sequences that I wasn't planning on using in the analysis. Then I ran through QIIME, but I'm getting a large number of unclassified fungal reads.

Welcome to the forums!

Yes, something is up with that classification...

I appreciate the detail you provided about your methods so far. This part is especially strange to me:

I have shotgun sequences that... I mapped to the UNITE database
...
I'm getting a large number of unclassified fungal reads.

After reads have been pre-filtered to match a database, it's pretty strange that they can't be classified against that exact same database!

What program did you use to pre-filter?
How did you train the sklearn classifier?

Thanks for your response. I used Geneious to pre-filter. Here is what I did for training:

Thank you for telling me more.

Your classifier code looks okay. I've not used Geneious (Assembly and Mapping | Geneious Prime) for filtering but I imagine it's working as intended.

The unite database is targeted at the eukaryotic ITS region, so I wonder if your shotgun reads from full genomes are largely falling outside of this region.

When using Geneious to prefilter, did you use the exact same sh_refs_qiime_ver8_97_s_10.05.2021_dev.fasta as the target database or did you use something provided by Geneious? Different database files could cause this issue, which is why I ask.

Ah that could be it! I used the updated UNITE database for the pre-filter and last year's version in QIIME. I'll rerun with the updated database and hope that helps.

Using the correct UNITE fasta helped a bit, but still a significant portion is not identified past kingdom Fungi. 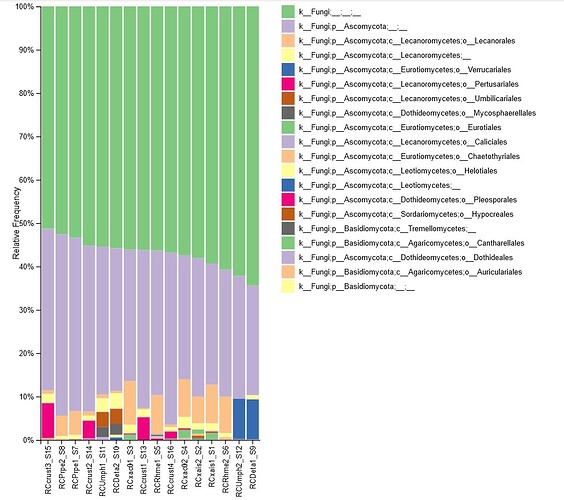 After updating the pre-filter, what percentage of reads are filtered out because they do not hit UNITE?

I do think you're right that shotgun reads may have an influence on this.

Would you like to explore this more? While some plugins focus on amplicons from a specific region, other plugins like q2-shogun are designed for shotgun reads.