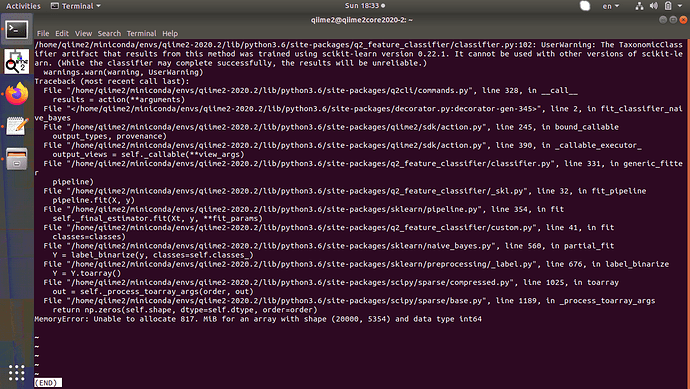 debug1360×768 241 KB
I tried to download the appropriate version of scikit but I already have it and I don't understand what is the problem since I can still create without problem a classifier.qza using the original tutorial but I cannot create my own.
Thank you in advance
1 Like
colinbrislawn (Colin J Brislawn) April 12, 2020, 8:31pm #2

The MemoryError means that you need more memory to build the classifier.

How large is the database you are using for training? How much RAM / Memory do you have on your machine / VM? It takes a lot more memory to train a classifier then it does to use a a classifier.

My computer has 8GB RAM and I use Greengenes the latest version with seq 180-500 because my trimmed amplicon legthis 220 (the full length was 251). How much RAM do I need?

How much RAM do I need?

That’s hard to estimate exactly, but probably more than 8.

What region did you sequence? What database are you using? Maybe someone has already trained a classifier and we can use that one.

You can also rent a cloud computer with plenty of RAM for about ~$1 per hour, but let’s not mess around with that until it’s needed.

Thank you very much for the advice! The cloud sounds great! I also can use a better computer. I imagine there are plenty of classifiers available, my amplicons are V3-V4 16S rRNA, but I really want to train my own

OK, that sounds great! Let me know if you need a hand getting the cloud deployment working.

My teams keep most stuff local, but the cloud can be really helpful for stuff like this, and Digital Ocean is pretty elegant to set up. (Not sponsored,