I got this curve from Illumina MiSeq sequencing.

image1823×624 37.3 KB
I understood from the sequencing center that only demultiplexing was made but no quality filtering was done.
Do I still need to proceed dada2? And in what parameters?
Thank you!
colinbrislawn (Colin J Brislawn) February 4, 2021, 12:05am #2

Welcome back to the forums!

Your quality score plot looks quite good. Is that for one sample or all your samples? How many reads made it all the way to 150 base pairs?

Do I still need to proceed dada2? And in what parameters?

Yes, I would try running dada2. I like starting with the settings shown in the examples in the Parkinson’s Mouse Tutorial, and see how well they work on my data set.

Let me know what you try and if you have any questions along the way.

Is that for one sample or all your samples?

This is a plot of all my samples.

But this is for single-end sequences. Is it better to use in Atacama Soil tutorial?

But this is for single-end sequences. Is it better to use in Atacama Soil tutorial?

Good catch! Yes, the Atacama Soil tutorial includes dada2 commands commands for paired end data you can use an examples.

The quality at the start of their reads is low, so they use

Given that your quality is higher, I might try running

when you rundada2 denoise-paired, but these decisions are up to you!

Let us know how it goes!

Hi @colinbrislawn,
when I running dada2 denoise-paired I get Frequency per sample: 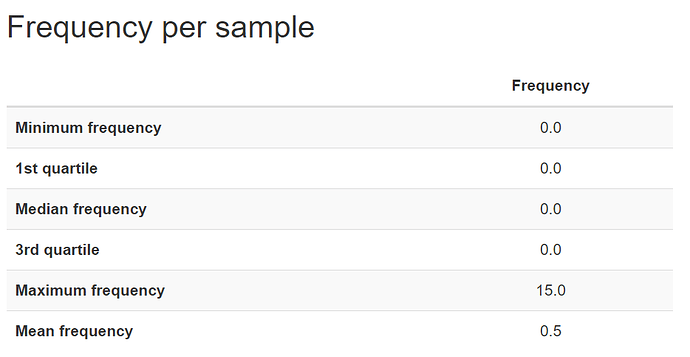 I think this might be the clue we need to explain why dada2 denoise-paired performed so poorly.

Your reads are 150bp x 2 = 300 bp of coverage, which leaves only 9 bp in the region of overlap, which might not be enough for dada2 to join them.

If you can’t join the reads, you could try running dada2 denoise-single on the forward and reverse reads separately and see what you find.

Let us know what you try next!
Colin