Hi! I divided the samples into two groups, the first group is n=102, and the second group is n=75. After running the following code to calculate the core diversity, the beta diversity box plot is as follows. How does n explain? 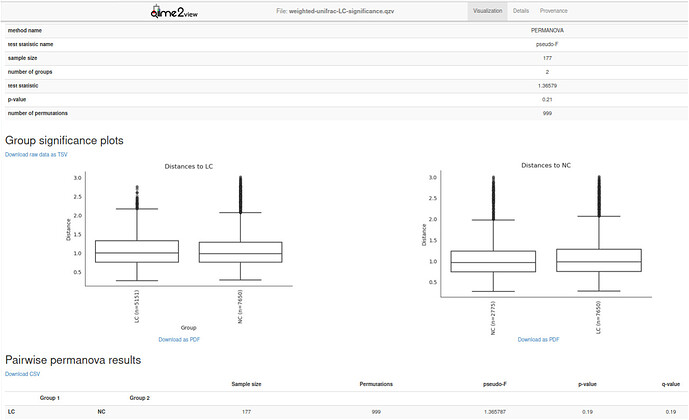 Since the first group on the x-axis of this plot is LC, the first box plot represents the distances from LC to LC - all the distances within the group LC itself! This is calculated as 102*102/2 - 102/2 = 5151, or n(n-1)/2 in general. This is analogous to calculating the number of diagonals and sides in a polygon. Or how many handshakes occur in a room if everyone needs to shake hands with everyone else exactly once

The second group on the x-axis of this plot is NC, so this box plot represents distances between NC and LC, which is simply 75*102 = 7650. In other words, that is 102 distances for each of the 75 samples in NC.

And then the same for the other plot.